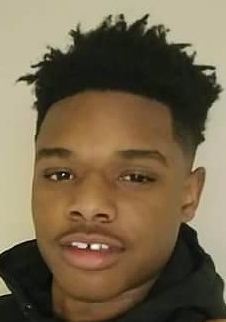 Funeral Services to Celebrate the Life of Jovontia A. Jones, 16, a sophomore at Davenport Central High School and resident of Davenport will be Wednesday, May 30, 2018 at the Pentecostal Church of God, 1234 Ripley Street, Davenport.  The family will greet friends Wednesday at the church beginning at 1:00 pm and conclude with a Going Home Service at 2:00 pm.  Private burial will take place Thursday with immediate family.

Jovontia died Sunday, May 20, 2018 following another senseless act involving gun violence in the city of Davenport.  His family extends a plea for the violence to stop in our community and the country.  Respect Life. Respect the Lord.

The Halligan McCabe DeVries Funeral Home has been entrusted with services.

He was a joyful baby and young man, was well liked and loved by many.  His smile would brighten your day and any room he entered.  His family and friends called him “Jovi Man” or Jovi.   He had been very active, participating in track and keeping physically fit.  He was a hard worker and most recently was employed by Hardee’s.

Memorials can be made to his family.

Donations may be made to:

Message from Mary Rehmann
May 29, 2018 10:55 AM
I am so sad at this terrible death of a young man, grandson of a friend Lisa Gay.  I am sad that gun violence is so common in our community.  Let us show our love, appreciation, and support for those working on non-violent alternatives to problems in our community.  I was pleased to see that Jovontia's death "shocked" our sheriff and others in the community to work harder on these senseless deaths of young persons.  Thank you.
Sister Mary Rehmann, CHM (Sister of the Humility of Mary)