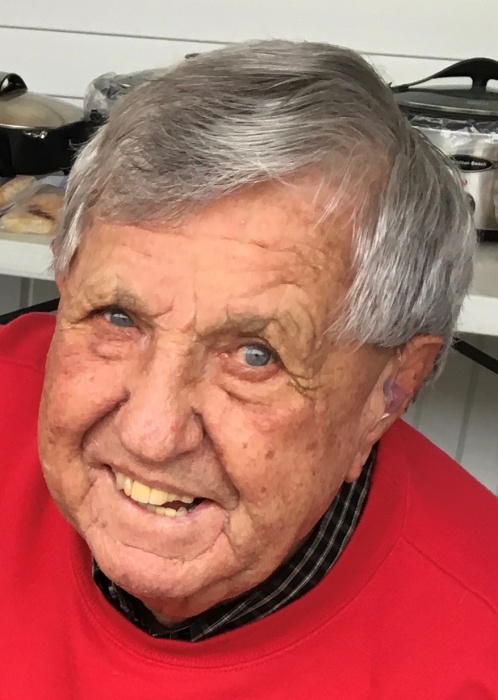 Private services will took place on at  Monday, December 14, 2020 at Our Lady of Victory Catholic Church with burial in Mt. Calvary Cemetery, Davenport, IA.  To view the mass click the following link: https://vimeo.com/489845702 flowers, memorials may be made to Assumption High School, Our Lady of Victory Catholic Church, University of Iowa Stead Family Children’s Hospital or plant a rosebush in Bill's honor.  A Celebration of Life event will be held in the summer of 2021 when it is safe to do so.

Wilfred Gerald Hammes was born December 30, 1925, on the family farm in Clear Creek, Iowa. He was the second youngest child of Peter and Theresa (Gries) Hammes. He proudly served our country in the Navy and was honored to take part in the Honor Flight on August 31, 2017.

Willie worked as a mail clerk for the United States Postal Service retiring in the fall of 1983. His second career was owning, managing, and maintaining rental properties.  Although he never truly retired, he and Joyce enjoyed over 30 years of wintering at Trophy Gardens RV Resort in Alamo, TX.  Willie had a tremendous green thumb which he put to good use at the resort.  He tended an extensive rose garden there which was later named in his honor.  In addition to gardening, he enjoyed dancing and playing cards with his many Texas friends.

He was a baseball coach at Northwest Little League for over 37 years and coached the Iowa State champions in 1979.  He also enjoyed hunting, trapping, and playing more cards, of course, especially at the Harper Hilton.  Grandpa Willie was also proud of his title as king of the corn on the cob eating competitions with his great-grandchildren!

Family meant everything to Bill/Willie Hammes!  He loved everyone, and everyone loved him!  We will miss his ever-present smile, his resilient, positive personality, and his playful, mischievous nature forever!

In addition to his wives, he was preceded in death by his sons, Drew and Jeff Hammes; a stepdaughter, Beth Bayer; his parents, and his six siblings. May they Rest in Peace.

To order memorial trees or send flowers to the family in memory of Wilfred Hammes, please visit our flower store.