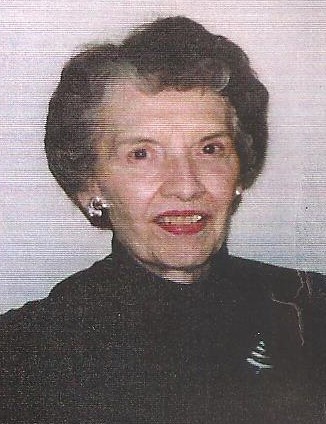 Virginia M. Donahue passed away peacefully August 9, 2020 at the age of 99. Until the time of her death, she was engaged in the life of her family and with those who lovingly cared for her in her final years at Crest Health Center. While formal and reserved in demeanor, she was a very caring person. She was a trusted confidante for her nieces and nephews.

Virginia was born in Pocahontas, Iowa, on November 7, 1920. She was the first-born daughter of Thomas J. Donahue, Sr. and Anna C. (Eral) Donahue. She graduated from Sacred Heart Catholic High School in Pocahontas, and was employed doing office work for a couple of local businesses. She was a member of the Poky Pals Club. She had fond memories of her friends from that time, and continued to be a subscriber to the local newspaper after she moved out of the area.

Virginia left home for nursing studies at Mercy College in Des Moines, Iowa. She switched to administrative and stenography studies, making that her career. She moved to Modesto, California to be near some of her mother’s family, the Erals, and remained there until she retired. Virginia’s professional career was as an Executive Secretary for Campbell Soups, in Stockton CA. She enjoyed travel, spending time with her friends, and caring for her trees and flowers. Among her many talents was tailoring her own clothing. She had refinement and was always looking sharp

In 1994, she moved back to Iowa, becoming a resident of Ridgecrest Village.  Her brother Tom and his wife Mary in Davenport were delighted she could now be part of the holiday and family celebrations. Virginia remained single all of her life, devoting herself to a life of prayer for all in need in this world. As a result, she served as a major influence in the lives of the younger generation.

Virginia put her considerable organizational skills to use as a volunteer at Ridgecrest in a number of ways that contributed to its development. She was an avid reader, staying abreast of local and national news. She was a member of a prayer group at Our Lady of Victory Catholic Church, and provided support for the Masses held at Ridgecrest Koning Chapel.

Preceding her in death were her youngest brother Donald Donahue, sister and brother-in-law Berniece and Frederick Westford, brother and sister-in law Thomas and Mary Donahue, and a niece Margaret “Peggy” Bryant.

The family would like to thank the loving and dedicated staff of the Crest Health Center for all of their care and support for our aunt, and for being there for all of us as well. While those of us who were part of her life are in sorrow for missing her, we remain inspired by her faith, and example. She prepared well to go to her heavenly Father, our Blessed Lord, and all the angels and saints.

To order memorial trees or send flowers to the family in memory of Virginia Donahue, please visit our flower store.