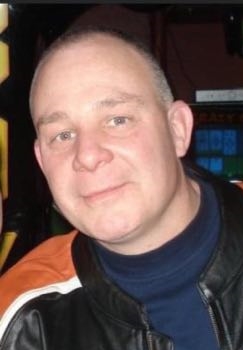 Thomas L. Rupert, 52, a resident of Davenport, passed away Tuesday, September 1, 2020 at his home after a brief but courageous battle with cancer.

Funeral services to celebrate Tom’s life will be 10:30 a.m. Tuesday, September 8, 2020 at the Halligan McCabe DeVries Funeral Home, Davenport.  The family will greet friends Tuesday from 9:30 a.m. until the time of the service at the funeral home.  Memorials may be made ot the family to establish a memorial at a later date.

Thomas LeRoy Rupert was born on June 11, 1968 in Galesburg, Illinois, a son of Richard and Jodi (Lehne) Rupert.  He was united in marriage to Yovanka C. Oszfolk on May 4, 1991 at Duck Creek Park, Davenport.

Tom was a baker with Hy-Vee since 1986.  He last served the Milan store.

Tom loved his family; he was a sarcastic smart ass who enjoyed ribbing his friends.  Tom enjoyed riding his motorcycle, watching the Cubbies, an occasional Busch Latte, and hunting and fishing in his earlier years.

He was preceded in death by his parents, brothers David and Jerry Rupert and nephew Benjamin Norris.  May they rest in peace.

To order memorial trees or send flowers to the family in memory of Thomas Rupert, please visit our flower store.