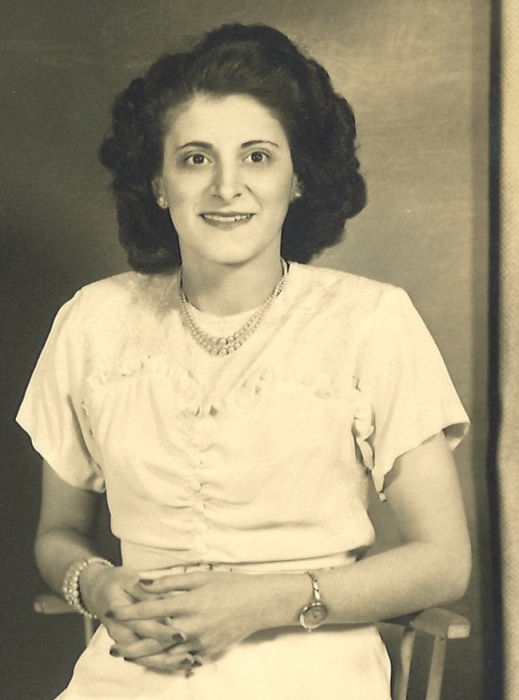 Funeral Services for Surria M. “Sue” Rizk, 96, a resident of Davenport, will be 10:00 a.m. Wednesday, April 7, 2021 at Trinity Episcopal Cathedral 121 W. 12th Street Davenport, Iowa.  Following the church service, burial will be in S. Pleasant View Cemetery Kewanee, Illinois.  The family will greet friends from 4-6 p.m. Tuesday at Halligan-McCabe-DeVries Funeral Home, Davenport whom are assisting the family.  Due to the pandemic, masks must be worn and social distancing maintained.  Surria passed away Monday, March 29, 2021 at Unity Point Trinity Hospital Bettendorf, Iowa.  Memorials may be made to Trinity Episcopal Cathedral, Davenport, Iowa.

Surria Mary Mike was born on June 6, 1924 in Toledo, Ohio, the only child of Toofe and Annie (Shaheen) Mike.  In November of 1951, Surria married Raymond Rizk, the love of her life, at Trinity Episcopal Cathedral in Davenport, Iowa.  Raymond preceded her in death in March of 1963.

Surria worked as a Manpower 3 specialist for the State of Iowa for 37 years.  She was #1 in the state of Iowa in job placement for many of those years for placing several thousands of people in jobs and career opportunities.  She was the owner of a hotel on the corner of 3rd and Perry Streets in Davenport, Iowa and before that did clerical work at JI Case and earlier in life at the Rock Island Arsenal.  Everything she achieved and shared in her life was EARNED through Hard Work, Diligence and being a very Conscience person.

Surria has been a member of Trinity Episcopal Cathedral for over 72 years.  She was always extreme in her Christian beliefs and faith and followed those Christian beliefs every day of her life.  She was completely devoted to her two children.  After her children were grown, she enjoyed dancing at the Col Ballroom twice a week in Davenport, Iowa.  She also sang in the church choir and other various choirs throughout her life.  As a teenager, the family would play all types of card games with the neighbors on the weekends, before there was TV’s or computers.  She was also involved with the Drum and Bugle Corp in High School and was a member of the track team, Class of 1942.  Surria was a member of the American Legion Auxiliary for 75 years. Surria was a master gardener. At an early age every year, she maintained a one-acre garden filled with flowers, vegetables and fruits. Surria enjoyed entertaining very much all of the guests that were at her son’s estate breakfast Bix parties every year during the Bix run, located at 45 McClellan Blvd. in Davenport, Iowa.

Those left to honor Surria’s memory include her children:  Toofe V. Rizk and Jenny Ann Rizk, both of Davenport and nine cousins scattered throughout the Northeastern states of the United States.  She was preceded in death by her parents and husband, Raymond.  The family would like to thank ALL of the support Service Teams and Doctors that have done their best to help her survive through the last eight years of her life ! Especially, Dr. Bradley Erickson at the University of Iowa Hospital, Iowa City, Iowa, Dr. John Patton of Davenport, Iowa and Jeffery Yaddof of Davenport, Iowa.

To order memorial trees or send flowers to the family in memory of Surrie "Sue" Rizk, please visit our flower store.