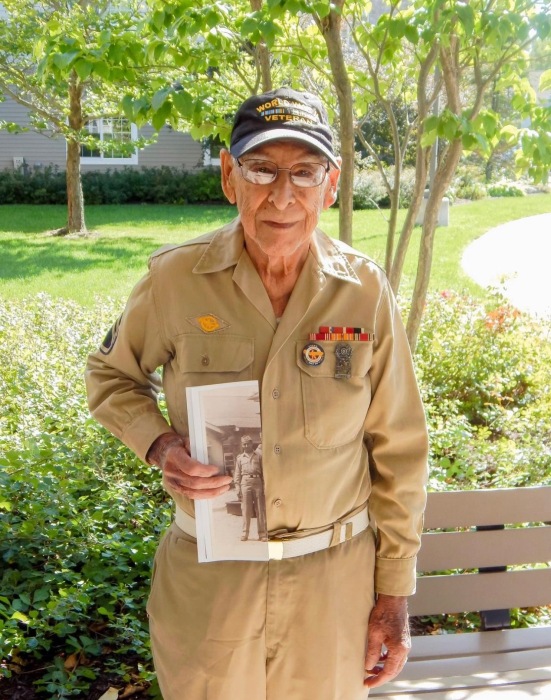 Perhaps you think you don’t know Sam Vasquez; but if you think again, maybe you do.  Maybe you saw him walking.  He was a regular walker for many years in the Quad Cities, covering many miles and many places.  Maybe you saw him on the evening news.  He could be a fixture there as well, advocating for various causes and speaking on behalf of senior citizens.  You might have read an article in the newspaper about Sam: maybe the one about his visit to Vinton, Iowa, to hear his grand-nephew’s presentation on Pearl Harbor; or maybe the one Bill Wundram wrote about Sam’s onion-topping days as a boy; or the one with his picture when he was asked to debate on the subject of NAFTA.  Maybe you saw the one when he advocated that the new civic center be built downtown Moline, where it is today.

Maybe you talked to Sam.  You might have chatted as you played golf with Sam at Indian Bluffs golf course, or you might have witnessed one of his ELEVEN holes-in-one.  Maybe you played cards with him.  He was an avid cardplayer; and when asked about his weekly card games, would respond with a chuckle, “I won a few, I lost a few, and I cheated a little.”  Maybe you had lunch with him or a visit with him at Senior Star in Davenport, Iowa.  Maybe you exchanged conversation while working side by side packing a sandbag or two during one of those great Mississippi River floods.  Maybe you talked to Sam on the phone.  For years he called to get out the vote, or he might have helped you at the polls.  He was a Deputy Registrar and worked the polls year after year.  He was emphatic about the privilege and right to vote.  Maybe back in his earlier days you saw him out walking his children around the neighborhood, distributing campaign literature.  Maybe you were in politics, serving the people, and Sam came to see you to talk about something he thought was important.  You see, Sam, shook hands with some of the great ones, Paul H. Douglas—the civil rights Democrat from Illinois; he heard Martin Luther King, Jr., give his I Have A Dream speech in person; and he dined with Cesar Chavez at the family home of his friend since childhood, Henry Vargas.

Maybe you saw Sam on the picket line.  He returned from the war and was hired by International Harvester Farmall Works, where he worked until he retired in 1981. When the Union came to Farmall, Sam joined the Union—UAW Local 1309.  When he retired, he was part of UAW Local 6 Retired Workers Chapter.  Maybe you were out walking and you passed Sam’s house where he might have been sitting out on the porch playing the guitar and teaching his children the great songs of the Labor Movement, the Civil Rights Movement, or the Depression Era.  Sam liked music.  He enjoyed his daughter playing the flute and his granddaughter serenading him with Las Mañanitas on the violin he had given her.

Maybe you sat behind Sam at Church and you saw him marching when they played the Battle Hymn of the Republic.  He loved to march.  He’d grab a baton, line his children up and march them around the house to a John Phillips Sousa record.  Maybe you passed him downtown Moline once upon a time showing his children how to get back in step when marching.  They were on their way to the library so Sam could show them how to look up the newspaper from the day they were born.  Maybe, more recently, you saw him marching in the Veteran’s Day parade in his Army uniform.  Sam served in the 125th Infantry, U.S. Army, in the Philippines.  Maybe you saw his interview during the Iowa Public Broadcasting preludes to Ken Burns’ World War II documentary, or it’s possible you saw one of his other video histories.  There is one about growing up in Cook’s Point in Davenport, Iowa.  In one segment, Sam talks about the wakes held for those who passed away and how the children were served hot chocolate.  Maybe Sam remembered having hot chocolate when he was ten years old and his mother passed away.  He seemed to always like hot chocolate.

In fact, Sam seemed to always like a good treat.  Maybe you saw him at Whitey’s having a strawberry banana malt or a black raspberry ice cream cone.  It was not uncommon for Sam to gather up his family even in the winter for a trip to Whitey’s.  In the summer, he would buy a block of ice and take it home to make raspas for his children.  Some evenings, he and his girls would have fun making donuts together.  When they were together these days, it was time for Harris Pizza.  On Mother’s Day, Valentine’s Day, and Easter, Sam was at Fannie Mae in Moline buying chocolates for his children.  He expected each sister to mother the sister younger than her and baby sister to take care of Mom.

Maybe you didn’t exactly see Sam.  Maybe you saw signs of him.  Maybe you passed the flowers he and his youngest daughter planted in the empty planters they found in downtown Moline.  Maybe one of his daughters helped you in their area of expertise.  You see, Sam started with his children the first minute he held them, telling them that one day they would go to kindergarten.  He began to instill in them the message that education is an opportunity and a future, a lesson he learned from his mother.  All Sam’s daughters graduated from college.  Soon, Sam’s youngest granddaughter will graduate from the University of Iowa and with that, all of his granddaughters will have graduated from college.  One day soon, Sam’s great grandson will go to kindergarten and the opportunities of education will be his as well.

You see, there were definitely things about Sam.  He was a good father.  He married Esperanza Sandoval on August 22, 1953 and they began a family.  She told her children even if she had gone out with the intent of finding someone who would be a good father, she would have never found anyone better than their dad.  He believed in the value of education.  He was a life-long learner himself.  In another time, he might have been a teacher, but he didn’t let that formality stop him.  He taught-- his own children and anyone willing to learn. He was an activist.  He was a Democrat; he served as a Trustee with the Moline Township; and was active in many other organizations.  But Sam didn’t wait for an organization.  He believed, and he believed in the power of one man’s actions.  He used to quote lines from famous speeches by great social thinkers and ask his children to name the speaker.  They say he never quoted this line from John F. Kennedy, “One person can make a difference, and everyone should try.”  Interesting, since he seems to have lived that one, and since he often quoted JFK speeches.  After all, they shared a birthday, Sam, Sam’s dad, and JFK--May 29th.  In fact, while Sam became politically active in 1948, in the great election of 1960 Sam was even more so.  By then, he had returned from serving in World War II, been working at IH Farmall Works in what was the Farm Implement Capitol of the World—the Quad Cities, married and started a family, and bought a house or two.  He was living the American Dream, this man whose parents were immigrants; whose roots were in the great and cultural state of Jalisco, Mexico; whose family began life in the Quad Cities living in a railroad boxcar; who suffered great poverty in the Depression; who made his way without a mom; who spent time as a child topping onions in the field to earn a little money for clothes, school, and an occasional treat, who experienced discrimination even into adulthood, even after serving his country.

Maybe in his most recent years, you knew Sam because you helped him in some way.  Maybe you served him his meals or checked in on his well-being from time to time.  Maybe you gave him a ride home when he seemed tired.  Maybe you helped him get documents he needed or   helped him find something on the internet.  Maybe you took in Sam’s beloved cat, Morgan, when needed.  Maybe you were a nurse who sang Happy Birthday to him during his hospital stay.  Maybe you fetched him a snack from the hospital kitchen in the middle of the night.  Maybe you made him more comfortable.  Maybe you brought out that Sam Vasquez smile with your kindness.  Thank you so much.

Samuel (Sam) Albert Vasquez passed away Tuesday, January 4, 2022, at the age of 95.  He’d lived a good life.  He had been saying that for years: “Don’t worry about me; I’ve had a good life.”  He came from humble beginnings and he used the gifts that God gave him to make differences in the world around him and to leave a legacy about family, education, and advocating for the benefit of others.

A visitation for family will be held for Samuel A. Vasquez on Friday, January 14, 2022, at Halligan McCabe DeVries Funeral Home, 614 Main Street, Davenport, IA.  Burial will immediately follow at the Rock Island Arsenal.

Sam's obituary was written with love by his daughter, Margaret Vasquez.

To order memorial trees or send flowers to the family in memory of Samuel Vasquez, please visit our flower store.