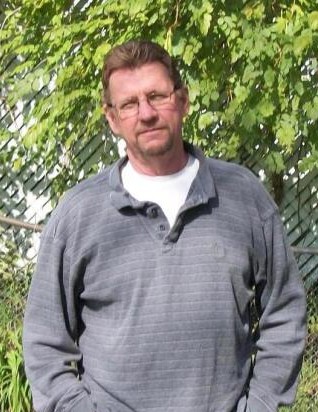 A private graveside service will be held at Linwood East Cemetery in Galesburg, IL in the veteran’s section. Halligan-McCabe-DeVries is assisting the family with arrangements.

Roger was born March 12, 1961 to Harry W. and B. Kay (Weidenhamer) Powell in Galesburg, IL. Both preceded him in death. He married Lora (Leahy), now Wright, on Feb. 1, 1985 and had two children; Michael D. Powell and Lindsey M. (Jon) Danielson, all of Galesburg, IL. He is also survived by his grandson, Leo M. Danielson, two brothers, Bill (Kim) and Brian (Heather) of Georgia, cousins Lyle Weidenhamer of East Galesburg and Lynn Weidenhamer of Wataga, and several nieces and nephews.

Roger grew up in Galesburg and Wataga, IL and worked mostly as a truck driver. He loved boating on the Mississippi River, reading, watching westerns, and playing cribbage. He trained in the Army Reserves in 1979 and served with the Salvation Army in Puerto Rico after Hurricane Maria. He was a member of the Elks in Galesburg.

Memorials can be made to the Salvation Army Adult Rehabilitation Center, 4001 N Brady St., Davenport, IA 52806.

To order memorial trees or send flowers to the family in memory of Roger Powell, please visit our flower store.