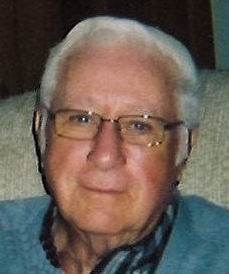 Funeral services and Mass of Christian Burial will be held at 10:30 a.m. Wednesday, September 15, 2021 at St. Paul the Apostle Catholic Church in Davenport. Burial will follow at Mt. Calvary Cemetery. Visitation will be 9:30 a.m. – 10:30 a.m. Wednesday at church. Memorials may be made to Clarissa C. Cook Hospice House or Vets for Vets. Halligan McCabe DeVries Funeral Home in Davenport is assisting the family with arrangements.

Dick was a customer service representative for Wagner’s Printers for 33 years, retiring in 1989. He owned and operated Precision Dies from 1958 – 1997. Dick was a member of St. Paul the Apostle Catholic Church, and enjoyed golfing, fishing, hunting, camping, traveling, and card club. He cherished his time spent with family, friends, and especially his grandchildren.

In addition to his wife, he was preceded in death by his parents; sisters, Dorothy, Ivadel, Lennice, and Bernitta.

To order memorial trees or send flowers to the family in memory of Richard Elvidge, please visit our flower store.