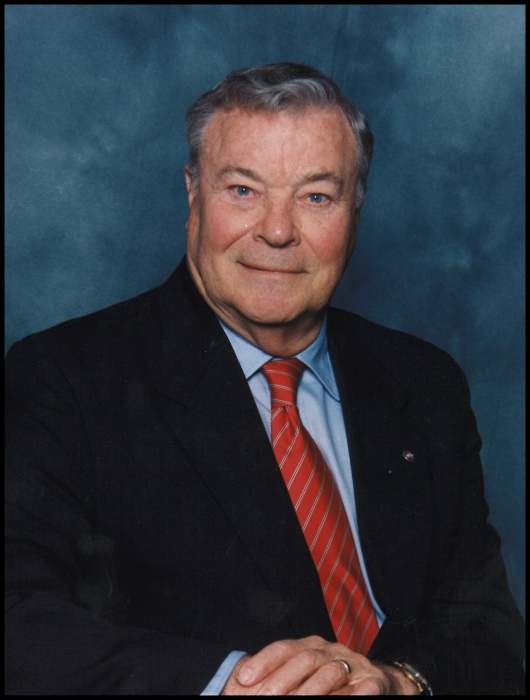 Paul L. Eckert, 93, passed away peacefully at the Clarissa Cook Hospice House, surrounded by family. A private funeral service was held on Friday, November 20, at Halligan-McCabe-DeVries Funeral Home, with Reverend Katie Styrt from First Presbyterian Church officiating, followed by a burial at the Rock Island National Cemetery.  Due to the current health crisis, services will be private but will be live-streamed at 10:30 a.m. Friday, November 20, 2020 by visiting Pauls’s obituary at www.hmdfuneralhome.com and clicking the link at the bottom.

Paul was the third of five children born in Herrin, Illinois, to Mana Beatrice (McGogh) and Eugene Carl (E.C.) Eckert. Always talented in both athletics and academics, Paul lettered in football, basketball and track, and graduated as the valedictorian from Herrin High School in 1945. He attended one year at the University of Illinois before enlisting in the United States Navy for a two-year tour of duty. After his honorable discharge, he re-enrolled at the U of Illinois, played on the varsity basketball squad for two years, and was a member of the National YMCA Basketball Championship Team that played that year in Los Angeles, CA. Upon graduation in 1951 with a B.S. in Education, Paul was awarded the Bronze Tablet Scholar Award, the highest scholastic honor at the University of Illinois. Additionally, he received his M.S. from Illinois in 1954.

Paul met Beverly Beirne while they were in high school, he a senior and she a freshman. After Beverly graduated from Southern Illinois University with a B.A. in Education, they were married on August 16, 1952, and moved to Centralia IL, where Paul took a job as a high school biology teacher and freshman/sophomore coach of football and basketball

Because of his teams’ excellent records and conference titles, he was recruited in 1954 by Davenport High School to become the Blue Devil’s head basketball coach. During his five-year tenure at Davenport High School, Paul led his teams to State Tournaments: 1956 - 3​rd Place; 1958 State Champions; 1959 – 2​nd Place. He was honored as Iowa Coach of the Year in 1955, 1956 and 1958. Paul then became the Assistant Principal at Central High School for two years, followed by five years as Principal of West High School.

Although Paul would continue to advocate for the importance of education and the benefits of athletics, at the age of 39 and after thirteen years with Davenport schools, Paul changed course and became the Executive Vice President and Secretary of Citizens Federal Savings & Loan Association in Davenport. He eventually served as President, CEO, and Board Chairman during his 29 years there. One of his proudest accomplishments was taking CF public to become Citizens Federal Savings Bank (Bancorp.) The company was then acquired by First Midwest Bank (FMBI) in 1992 and Paul retired shortly thereafter.

His business acumen and leadership skills led him beyond Davenport to serve on several boards including the Iowa Savings & Loan League (Chairman1980-81;) Vice Chairman of the board of the Federal Home Loan Bank of Des Moines; and member of the Board of the Federal Reserve System in Washington, D. C. on their Thrift Institutions Advisory Council, one of twelve nationwide.

Paul cared deeply for the city of Davenport and the communities of the Quad-Cities, and was a tireless and devoted leader in promoting the area which he considered one of the best places to live and raise a family. As a true believer in volunteerism along with a strong sense of responsibility and giving, he served the community in various positions: as a long-time board member of the YMCA; a valued member of the Davenport Chamber of Commerce (President 1978-79;) a loyal member of Rotary for nearly 50 years (President 1982-83;) and sixteen years as an active member with United Way, serving on their Community Services Board of Trustees beginning in 1967 and chairing the Public Service Division in 1969.

He joined the First Presbyterian Church upon his move to Davenport in 1954. Paul was a member of the Rock Island Arsenal and the Davenport Country Club, eventually serving as president of the DCC Board of Directors. He enjoyed playing golf with his foursomes and racquetball at the YMCA. And he held firm in his lifelong devotion to the St. Louis Cardinals, even among this mecca of Chicago Cubs fans!

Paul was devoted to his friends; supportive of education; astute and honest in business; and caring and generous to causes close to his heart. He was a man of principle, high moral character and a shining example of a life well-lived.

Family was of utmost importance to him and one of his greatest joys. He loved having all of us together and instigated some memorable family reunions. To us, his family, he was everything. He was our rock. He and our mom created a steady and stable base on which we grew and from which we flew. Dad was our first coach, our first teacher, our first dashing dance partner, our first example of being a truly good and giving person. He was a deeply-loved and loving husband, father, papa, and great-papa, an endless source of encouragement, support and unconditional love.

He will live forever in our hearts ~ and in the hearts of those lucky enough to have known him.

Paul is survived by his wife of 68 years, Beverly; his four children and their spouses: Marcia and husband Doug Otte of Dallas, TX; Michael Eckert and wife Lisa (Horn) of Edina, MN; Sally and husband Don Tourte of Clive, IA; and Susan and husband Tom Bush of Davenport. Also surviving are his 13 grandchildren and their spouses and 13 great-grandchildren. Other survivors include Paul’s sister Marilyn Church and her husband Wynn of Geneva, IL; and many nieces and nephews.

A celebration of Paul Eckert’s life will be held at a later date.

If you wish, memorial gifts may be made to Quad City Community Foundation, Clarissa Cook Hospice House, Family YMCA, Handicapped Development Center (HDC), or a charity or church of your choice.

To order memorial trees or send flowers to the family in memory of Paul Eckert, please visit our flower store.