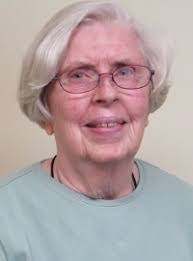 Nora J. Dvorak, 85, a resident of Davenport, died Saturday, October 3, 2020 at the Clarissa C. Cook Hospice House, Bettendorf.  Funeral services and a Mass of Christian Burial will be 10:00 a.m. Tuesday, October 6, 2020 at St. Paul the Apostle Catholic Church, Davenport.  The Mass will be livestreamed by clicking this link https://www.facebook.com/stpauldisciples/ . Burial will be in Mt. Calvary Cemetery, Oxford, Iowa.  Visitation will be held from 5 until 6:30 p.m. Monday at the Halligan-McCabe-DeVries Funeral Home, Davenport.  Masks and social distancing will be adhered to out of respect to Nora. In lieu of flowers, memorials may be made to Attacking Trafficking, Diocese of Davenport Immigration Program, or St. Joseph Indian School, South Dakota

Nora attended Marycrest College and earned a degree in Childhood Development from Iowa State University.  She worked as a social worker for Gerard of Iowa in Mason City and for the Iowa Department of Human Services.  She retired as the Director of Refugee Re-Settlement Program for the Diocese of Davenport in 1999.  She resettled hundred of families from Vietnam and Bosnia.

Nora was an active parishioner at St. Paul the Apostle Catholic Church, and part of their Social Action Committee as well as the Diocese’s.  She also was a part of Quad City Interfaith, Churches United, One Church One Child of Iowa, Iowa Catholic Conference and their subcommittee on Immigration, the Davenport Civil Rights Commission, Davenport Community Advisory Panel, Attacking Trafficking, a founder of the Big Brothers-Big Sisters Program in Davenport, and a member of the Scott County New Born Safe Haven.  There have been 45 babies and counting that have been rescued as a result of this law.

Nora was a “kick-ass woman”, as described by her granddaughter.  Although she accomplished a great deal in her lifetime of service to others, she remained very humble.  She was the proud recipient of the “One Among Us” Award during the Pacem in Terris Peace and Freedom Award ceremony at St. Ambrose University and was on the list of people to pray for at the Vatican. Nora loved athletics, particularly Iowa Hawkeye football.  She was also an amazing seamstress.

In addition to her husband, she was preceded in death by children: Philip Dvorak and Ann Juhl, a grandson, Jim Juhl, her parents, and siblings: John Reynolds and Mary Volk.  May they rest in peace.

To order memorial trees or send flowers to the family in memory of Nora Dvorak, please visit our flower store.