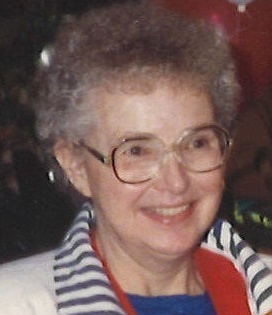 Funeral services for Mildred “Midge” Richardson, 87, of Davenport, will be 11a.m. Thursday, November 5, 2020 at the Halligan-McCabe-DeVries Funeral Home, Davenport.  Burial will be in Fairmount Cemetery, Davenport.  Visitation will be Thursday from 10 a.m. until the time of the service at the funeral home.  Midge died Sunday, November 1, 2020 at Good Samaritan, Davenport.

Midge retired from the Hansaloy Corporation in 1998 after 11-plus years of service.  She was an avid reader, especially of mystery novels and enjoyed watching the Triple Crown horse races.

In addition to her husband, she was preceded in death by her parents, two sisters and two brothers, and her beloved Jack Russell Terrier of 16 ½ years, Rusty.

To order memorial trees or send flowers to the family in memory of Mildred Richardson, please visit our flower store.