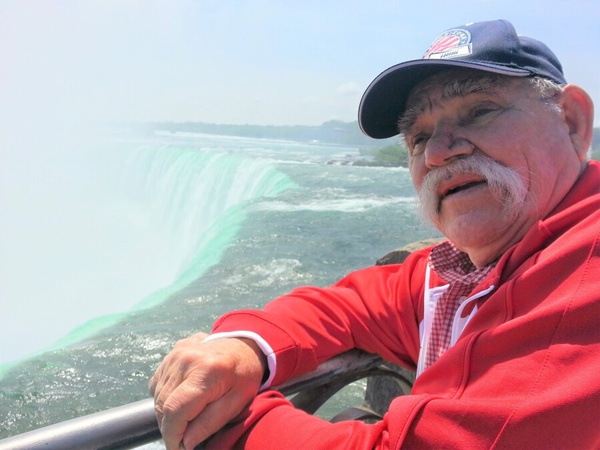 Michael Kurylo, who lived in Bettendorf, Iowa, with his son, Peter, died December 8 at Genesis Medical Center in Silvis, Illinois. He was 85.

Funeral services and Mass of Christian Burial will be held at 11:00 a.m. Monday, December 14, 2020 at St. Paul the Apostle Catholic Church in Davenport. Burial will be at Mt. Calvary Cemetery. The funeral mass will be livestreamed and may be accessed on the church Facebook page at www.facebook.com/stpauldisciples . In lieu of flowers, memorials may be made to the family for various charities Michael supported.

A devout Catholic, he attended Mass daily until March, when the coronavirus pandemic made it unsafe. He died of COVID-19 complications and pneumonia days after being diagnosed.

Born in the village of Tsvitova in Buchach, Ukraine, he and his family were relocated to work on a German farm alongside Allied POWs during World War II. He recalled occasionally playing with unexploded ordnance in the woods nearby, as well as the day an American flyer landed to tell them they were liberated. After the war, the family lived in a Displaced Person camp for several years rather than return to Communist rule in the Soviet Union.

He became a naturalized citizen while serving in the U.S. Air Force. His patriotism was fierce. He was especially moved after a visit to the Pearl Harbor National Memorial in Hawaii with two of his daughters.

His name is inscribed on the American Immigrant Wall of Honor at the Ellis Island National Museum of Immigration.

He coached his sons’ and daughters’ soccer teams and loved to make audio recordings of vocal and instrumental concerts in which his children performed.

He was a Fourth Degree member of the Knights of Columbus, an international   Catholic fraternal service organization. For several decades, he and his wife were custodians of a pilgrim statue of Mary that traveled from house to house. They would lead followers in reciting the Rosary.

Mike worked as a machine operator at the Caterpillar plant in Mount Joy, Iowa, until it closed in 1980 while he still had five children at home. He was one of many workers who lost their jobs when the farm crisis of the 1980s hit Davenport and the rest of the Quad Cities hard. He worked as a driver, security guard and other jobs to provide for his family over the next three decades.

Mike loved tinkering with cars and coaxing life back into a dead engine with parts he snagged from a local junkyard. If you considered it trash, he could find a use for it. After a church renovation, he repurposed pews and kneelers into desks, shelves and benches.

He had a lifelong love for gardening, inspired by the time he spent on farms in Ukraine, Germany, and Iowa. His strawberry patches were legendary. He also took pride in his ability to fix anything, including a cymbal on his son’s drum set that had cracked in half. He reunited the pieces with a rigged piece of metal. It never sounded the same, but it was whole.

Mike was gregarious and loved all types of music and dancing, from polkas to Johnny Cash to classical.  He was in the audience during two Yo-Yo Ma appearances, one in Iowa and the other in Atlanta. During a session where the classical cellist took questions from the audience, Mike was among the first at the microphone. “My daughter plays the cello and another one plays the viola, and we are huge fans of your music,” he said, never quite getting around to asking a question.

Like a magnet, he was drawn to babies and small children he saw at church or the grocery store. He carried a small harmonica everywhere in his shirt pocket and gifted them to his grandchildren, who never quite got the hang of how to play. He would spontaneously break into “Happy Birthday,” when appropriate, followed by “Michael, Row Your Boat Ashore” and, inexplicably, “Hang Down Your Head, Tom Dooley.”

In weekly family Zoom calls during the pandemic, if he sensed a lull in the conversation, he pulled out his harmonica and started to play.

He was immensely proud of all his children, each of whom he taught, not always patiently, how to drive a stick shift. They all have stories of that painful rite of passage. They grew up to become a doctor/professor, teachers, musicians, a journalist, a writer, and public servants. He never met a stranger and often regaled them with stories about where his children worked and where his grandchildren went to school.  He loved to swim with his grandchildren. He would impress them with cannonballs and other stunts, and at age 80, a jump off the high dive.

All his children have stories about road trips with Dad, most of which occurred after they left home. They include chasing tornadoes, blown tires, broken speedometers, winding roads, and keeping up with other drivers in the Kurylo caravan. These have become cherished memories.

Mike lives on in Google Maps, where the street view of his old home in Rock Island, Ill., shows him in all his grainy glory, sitting on a folding chair in his garage, sipping a cold beverage beneath a rippling American flag.

Halligan-McCabe-DeVries Funeral Home is assisting the family.  Online remembrances may be expressed at www.hmdfuneralhome.com .

To order memorial trees or send flowers to the family in memory of Michael Kurylo, please visit our flower store.