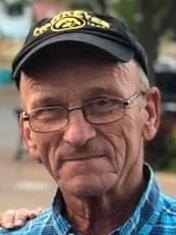 Michael Dennis Brown, 74, of Davenport died Friday, March 12, 2021, at his home, following a short illness. Funeral services and a Mass of Christian Burial will be held 10:00 a.m. Wednesday, March 17, 2021, at Sacred Heart Cathedral, Davenport. Burial will take place at Oakdale Memorial Gardens. Visitation will be 4:00 p.m. – 7:00 p.m. Tuesday, March 16th at Halligan McCabe DeVries Funeral Home in Davenport. The family would like to place a memorial park bench in the space that brought him such joy.  In lieu of flowers, memorial donations may be made to the family for this purpose.

Mike deeply valued his time with family, whether playing with his grandchildren, joining his brothers for card games, or coaching his son’s sports teams. He was President of Davenport Dads Club Softball.

Following in the family footsteps, Mike worked as a carpenter for 25 years. Later he worked for Independent Insurance Services and Walmart. In 2013, he was able to combine all his skills and interests in the position he dearly loved, working as Senior Carpenter for the City of Davenport Parks and Recreation Department.

To order memorial trees or send flowers to the family in memory of Michael Brown, please visit our flower store.