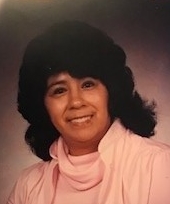 Funeral services celebrating the life of Margaret Ann Lopez Adams, 77, of Davenport, will be 1pm Wednesday, October 27, 2021 at the Halligan-McCabe-DeVries Funeral Home, Davenport.  Burial will be in National Cemetery, Rock Island Arsenal.  Visitation will be from Noon until time of service at the funeral home.  Memorials may be made to the family.

She was born August 13, 1944 in Davenport, a daughter of Frank and Epifania “Fanny” (Ortiz) Lopez, Sr.  She was united in marriage to Steve Holifield and later to Gary Adams.  Gary preceded her in death in 2018.

Prior to her retirement, she had worked in several area businesses, including Crescent, Brach’s, and Oscar Mayer.

She enjoyed going out to eat and to the casinos, crossword puzzles, watching her soap operas (especially The Young and the Restless), cooking and spending time with her large family.

In addition to her husband Gary, she was preceded in death by her parents, sister Frances Heath, and brothers Frankie, Archie, Leonard, and Danny Lopez; and several nieces and nephews.  May they rest in peace.

To order memorial trees or send flowers to the family in memory of Margaret Adams, please visit our flower store.