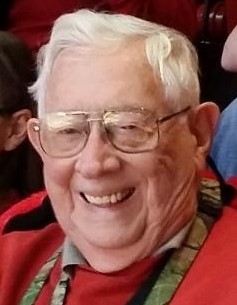 Funeral services celebrating his life will be held at 10:00 a.m. Wednesday, August 4, 2021 at Halligan McCabe DeVries Funeral Home in Davenport. Burial will be at Davenport Memorial Park. Visitation will be 5:00 p.m. – 7:00 p.m. Tuesday, August 3rd at the funeral home. Joe’s family invites you to proudly wear your Iowa State gear or colors to the visitation and service. Memorials may be made to Genesis Hospice or St. Paul the Apostle Catholic Church.

Joe was born February 5, 1933 in Davenport, the son of Henry Joseph and Gertrude (Costello) Stuckel. He married Shirley Jean Dipple, April 24, 1954 at St. Alphonsus Catholic Church in Davenport. She preceded him in death April 17, 2012.

Joe was in the Naval Reserves for 9 years and worked for Oscar Mayer in Davenport for 43 years. After retirement, Joe and Shirley traveled the United States, visiting family and friends, and especially enjoying their grandkids and their activities. He was a member of St. Paul the Apostle Catholic Church and was an avid Iowa State Cyclone fan. Heaven has gained a new Cyclone fan, and our mother has her dancing partner back.

To order memorial trees or send flowers to the family in memory of Joseph Stuckel, please visit our flower store.