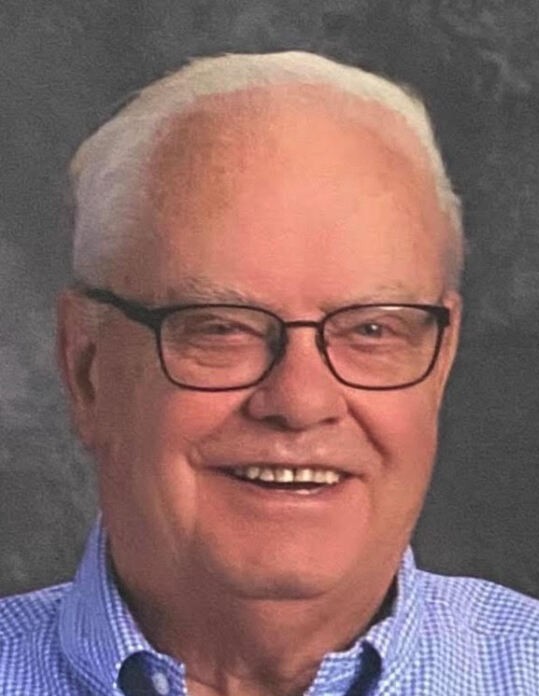 Joseph Patrick Scott, of Davenport, died at Ridgecrest on January 18, 2022, of lung cancer at age 90.  Visitation will be held on Saturday, January 22, 2022 from 9:00-11:00 am in the gathering space at St. Anthony Catholic Church in Davenport.  Immediately following at 11:00 am, a funeral Mass will be held at St. Anthony’s.  The Mass will be livestreamed by visiting https://www.youtube.com/channel/UCFcpGJB4b6cbWTDvn-c14EA Burial will be at Mt. Calvary Cemetery, Davenport.  Due to the COVID pandemic, the family requires everyone attending to wear a mask.  In lieu of flowers, memorials may be made to St. Ambrose University (for scholarships) or to the Congregation of the Humility of Mary.

Joe was born 13 April, 1931, in Davenport, Iowa, to Ella M. (Severin) Scott and George W. Scott.  He attended Saint Vincent Elementary School under the care of Humility of Mary Sisters.  He went to St. Ambrose Academy for his high school years and then on to Saint Ambrose College.  There he earned a degree in Philosophy, graduating in 1953.

Joe had some seminary training at St. Bernard’s in Dubuque, but he flunked out.  He was too interested in girls.  His life was saved by Donna M. Schuster, whom he met in 1955, several weeks before she was to be married to someone else.  Joe was then drafted into the U.S. Army, and so Donna drove down to Fort Bliss, where Joe was stationed and where they married in 1956 in a tiny ceremony with only a very few people able to attend.  This ended up being a two-year honeymoon on the border of El Paso and Ciudad Juarez.  Their daughter Becca was born in El Paso in 1957.  Then--back to Davenport upon discharge and off to work at Petersen Harned Von Maur, where he and Donna had first met a few years before.

In 1958, Joe began teaching, first in Calamus, Iowa, for two years, then starting in 1960 in Davenport at (brand new) West High School for 25 years, and then on to North High School for nine years.  He taught French nearly all those years.  He retired (the first time) in 1993.  He was hired back to Davenport Central High School in 1996, teaching a class of Intro to Latin and Greek which he had originated in 1974.  He retired—again—in 2019.  So yes, Joe taught high school for 58 years total, retiring finally at the age of 88.

In those early years of teaching two more children were born:  Tony in 1961 and Jenny in 1965.  Besides teaching, Joe also maintained several rental properties, two duplexes of which he built himself.  Joe liked reading, puttering in the yard, growing produce (and even canning in the early years), and generally staying quite busy until only the latest years of life.  He loved good food, a big social life (including with neighbors, church friends, teaching colleagues, & students who dropped by each year on winter solstice), dogs, and all family and people around him.  His faith meant a great deal to him, and he regularly attended mass his entire life.  Joe always pointed to the sisters and priests associated with his earliest years in life, particularly at St. Vincent’s, as those he had the closest, most positive associations with.  He was also close to his aunts, Coaina and Eunice Scott, all through his youth, and credits them with helping him have a safe and solid childhood.

Joe was preceded in death by his parents, his two aunts, his sister, Mildred Scott Genz, and brother, Dennis Scott.  A niece and two nephews also preceded him in death.

Joe’s life was filled with family, friends, and everyone in and everything about teaching and learning.  He was teacher to thousands of students over his decades in the classroom.  He also was personally responsible for planting hundreds of trees, with the help of students at both West High School and North High School, to help bring beauty to both campuses.

“The true meaning of life is to plant trees, under whose shade you do not expect to sit.”    –Nelson Henderson

To order memorial trees or send flowers to the family in memory of Joseph Scott, please visit our flower store.