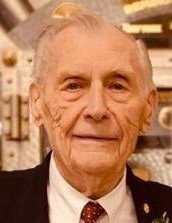 Funeral services and Mass of Christian Burial will be held at 10:00 a.m. Monday, August 24, 2020 at St. Anthony Catholic Church in Davenport. Burial will be at Rock Island National Cemetery. Visitation will be 3:00 p.m. – 6:00 p.m. with a rosary recited at 3:00 p.m. and a time of sharing beginning at 5:30 p.m. Sunday, August 23rd at Halligan McCabe DeVries Funeral Home in Davenport. Face masks and social distancing will be observed. In lieu of flowers, donations can be made to American Legion Post #26 or St. Anthony Catholic Church.

Joe born July 21, 1931 in Lyons (Clinton) IA.  He attended Lyons High School where he was an Eagle Scout and a multisport Athlete.

He attended Iowa State, where he played football and baseball. Joe proudly served four years in the Air Force as a pilot during the Korean Conflict. After serving, he attended St. Ambrose College and University of Oklahoma. Joe retired after a 30-year career as a Procurement Contracting Officer for the U.S. Department of Defense, where he was a respected negotiator by foreign officials.  He was a consummate entrepreneur whose enterprises included: Northwest Construction, BK Associates, Safari Campground, Double B Enterprises, Dynamics Security Systems, and JB Realty. He was a life-long learner, and at age 85, successfully completed a tax course, where afterwards he was employed to teach tax code. His creative mind led him to hold numerous patents over the years.

On October 20, 1956, he married the love of his life Mary Ann (Daniel) Borbeck, they were married for 63 years before her passing in December 2019. They have four children: Cathy (Peter) Lucas of Overland Park, Kansas, Jay Borbeck of Bettendorf, Iowa, Suzy (Scott) Ketelsen of Cedar Rapids, Iowa, and Connie (Jeff) Bear of West Linn Oregon; 12 grandchildren, and one great-grandchild.

His love of sports was demonstrated by his 64 years as a professional referee for boys and girls High School through Division I athletics. He was widely respected for his knowledge and application of the rules, where he believed that an official should never be a factor in the outcome of the game. Joe was very proud to referee with his son Jay for 41 years.

He was one of four principals who founded Marquette Academy, providing quality K-8 education in the heart of the city. Joe enjoyed volunteering at the German American Heritage Museum.

To order memorial trees or send flowers to the family in memory of Joseph Borbeck, please visit our flower store.

Recitation of the Rosary