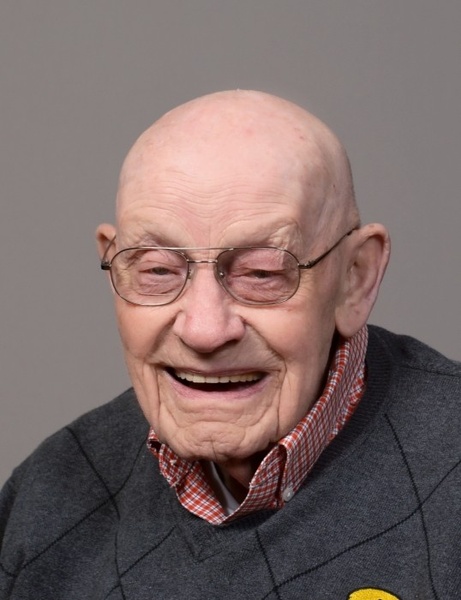 Funeral services and Mass of Christian Burial for Joseph V. Doyle, 92, of Bettendorf, will be 10:30 AM Saturday, October 23, 2021 at St John Vianney Catholic Church, Bettendorf.  Burial will take place in Mount Calvary Cemetery, Davenport. Visitation will be Friday from 4 until 7 PM at the Halligan-McCabe-DeVries Funeral Home, Davenport. Additional visitation will be held Saturday at church from 9:30AM until 10:30AM.  Joe’s impeccable timing allowed his funeral service to fall on the Iowa bye week!

In lieu of flowers, memorials may be made to Mayo Clinic, the Honor Flight, or any Scott County Catholic School.

Joe died peacefully Monday, October 18, 2021 at The Fountains, Bettendorf surrounded by his  family.

Joseph Vincent Doyle was born March 5, 1929, in Davenport, a son of James W. and Elizabeth Ruth (Miller) Doyle. He attended St. Ambrose Academy where he played football. He proudly served our country in the Army during the Korean War earning the rank of Corporal. He was honored to be part of the Honor Flight in the Fall of 2018.

He was united marriage to Margaret “Peggy” McGuire on October 1, 1960 at St. Paul the Apostle Catholic Church, Davenport. They have shared over 61 years of marriage and memories together.

Joe work for Borden’s driving a milk route all over the Quad Cities for many years which later became Land O Lakes and Swiss Valley. Later in his career he was an interplant driver driving the Dubuque and Cedar Rapids routes. On his days off, he would drive for Wonder Bread. He had an incredible work ethic. Following his retirement in 1991, he went to work at Rookies assisting in cleaning duties.

He was a member of the Knights of Columbus and the Moose Lodge.

Joe was a lifelong Hawkeyes, Colts, Cleveland Indians and St. Louis Cardinals Fan. Joe was into coffee before coffee was cool. He was responsible for keeping area donut shops in business with his frequent stops for a cup a coffee and a plain donut. Joe’s children willing ran errands with him because he always asked “do you want to stop for a cup of coffee?” Which meant a stop at a donut shop and a cream filled long john.

God blessed Joe with a kind heart and a distinctive laugh, a sound of pure joy from deep within his soul.

He was preceded in death by his parents and a brother, Charles. May they rest in peace.

To order memorial trees or send flowers to the family in memory of Joe Doyle, please visit our flower store.