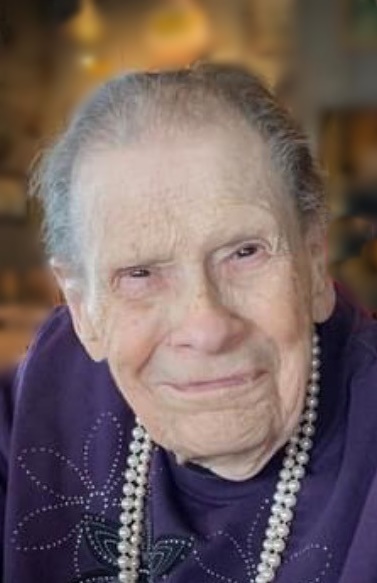 Jeanne L. Chenoweth, 97, of Davenport, died Thursday, May 12, 2022 at Trinity, Bettendorf surrounded by family.  Funeral services and Mass of Christian Burial will be 10:30 a.m. Thursday, May 19, 2022 at Sacred Heart Cathedral, Davenport.  The Mass will be livestreamed by visiting SACRED HEART CATHEDRAL LIVESTREAM Burial will be in Mt. Calvary Cemetery, Davenport.  The family will greet friends Wednesday from 4 until 6 p.m. at the Halligan-McCabe-DeVries Funeral Home, downtown Davenport with additional visitation from 10 a.m. until the time of the Mass.  In lieu of flowers, memorials may be made to family or St. Jude’s Children’s Hospital.

Jeanne L. Chaon was born on September 13, 1924 in Conde, South Dakota, a daughter of George and Sophie (Chalberg) Chaon.  She was united in marriage to Joseph Ray Chenoweth on December 25, 1943 in Davenport.  Ray preceded her in death on March 29, 2010 after 66 years of marriage.

Jeanne was the cafeteria manager at Taylor School and then Holy Trinity School in Davenport retiring in 1988.

Jeanne was a woman of great faith and an active parishioner of the former St. Joseph’s Catholic Church where she was past president of the Home and School Association and Christian Mothers. She enjoyed cooking, baking, sewing, crocheting, reading, listening to classical music and watching classic television shows like Matlock and Golden Girls.

In addition to her husband, she was preceded in death by her sons Joseph Chenoweth and Dr. Steven Chenoweth, her parents, and two brothers and three sisters.

The Chenoweth family would like to thank the nurses and staff at Trinity, Bettendorf for all the loving and compassionate care shown to Jeanne.

To order memorial trees or send flowers to the family in memory of Jeanne L. Chenoweth, please visit our flower store.
Send a Sympathy Card