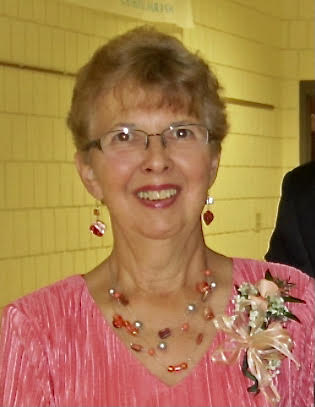 Born in Milwaukee, Wisconsin on December 30, 1937 to Irene Fintak, Geri was a calm and kind soul who deeply cherished family and friends.  After graduating from Notre Dame High School in Milwaukee she kept in close contact with her high school friends for the rest of her life and had annual summer reunions which she always looked forward to.

While working in Milwaukee she met Patrick Shepard.  Pat and Geri were married in 1959, first living in West Allis, Wisconsin and then in 1969 moving to Bettendorf, Iowa.   Their focus was their family:  boating on the Mississippi River, yearly vacations to Hayward, Wisconsin and following all the different activities that their children were involved in.   They were married 50 years and were charter members of St. John Vianney Parish where Geri was a member of Circle and Forever Young.  For many years Geri volunteered with Meals on Wheels, delivering food to seniors.   After retiring as a secretary, she became a "snowbird" and wintered at Citrus Gardens in Mesa, Arizona.  She and Pat had great fun with newfound friends in retirement.  Geri was the secretary and an active member of the bowling league, a member of the Citrus Gardens chorus, and she enjoyed golfing, bible study and going to musicals.  Geri enjoyed the many visits from children and grandchildren, partaking in the grandchildren’s activities and seeing them all graduate from high school and college.  Pat passed away in July 2009.

Geri met James Willett through mutual friends from church, and they were married in 2011.   They continued to be snowbirds wintering in Arizona until 2017 when they moved back to Bettendorf full time due to health reasons.  Jim was a wonderful caregiver to Geri as her Parkinson's disease progressed.  Jim passed away in March 2020.

Geri is survived by her children:  Karen DeMello of Mountain View, California; Patricia Shepard (Larry) of Huntsville, Utah; Kevin (Kathy) Shepard of Davenport Iowa; and Kate (Bart) Bycroft of Salina, Kansas.  She is survived by grandchildren:  Logan and Danielle Voellinger, Michael (Katie) and Nick Shepard, Michelle & David Mampre, Jonathan (Holly) and Alex (Gaby) Bycroft; by great-grandchild Olivia and the upcoming arrival of Baby Shepard; and by stepson James Willett, Jr.    She was preceded in death by Patrick Shepard, James Willett, grandson Lucas Voellinger, and by her brothers Thomas and Richard Fintak.

Memorials can be made to St. John Vianney Catholic Church or the Michael J Fox Foundation for Parkinson's Research.

According to her wishes, Geri will be cremated.  A Memorial Mass will be held at 1p.m. Saturday August 14, 2021 at St. John Vianney Catholic Church, Bettendorf. The family will greet friends from Noon until the time of the Mass Saturday, the 14th at the church. Private burial will take place with her husband Patrick at the Rock Island National Cemetery, Arsenal Island.

To order memorial trees or send flowers to the family in memory of Geraldine Shepard - Willett, please visit our flower store.