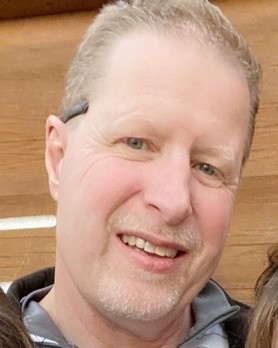 Gerald “Jerry” Gerardy, 55, of Greeley, Colorado passed away peacefully surrounded by his loving family on March 23, 2022 at Genesis East Hospital in Davenport.

Funeral services and Mass of Christian Burial will be held 10:30 a.m. Saturday, March 26, 2022 at Our Lady of Victory Catholic Church, Davenport. Burial will be at St. Ann’s Cemetery, Long Grove. Visitation will be 4:00 p.m. – 7:00 p.m. Friday, March 25th at church. An additional visitation will be one hour prior to the Mass on Saturday. Halligan McCabe DeVries Funeral Home in Davenport is assisting the family with arrangements.

He was born July 30th, 1966 to John and Rosina (Banowetz) Gerardy in Maquoketa Iowa.

Jerry graduated from North Scott High School and moved to Greeley, Colorado shortly after graduation. He worked at RR Donnelley for the majority of his career. He spent the last couple of years working at Vestas and working security for Union Colony in Greeley.

Jerry had a passion for taking care of his family and was the first guy to give you the shirt of his back. Everyone that knows him would say he loved life, was positive, and always had a smile on his face. He enjoyed country line dancing, going on cruises, he was an avid Iowa Hawkeye fan for both basketball and football. The more he had the opportunity to see his family the more it made him smile. Over the past couple years he spent a lot of time with his beloved Uncle and Aunt, Amy and Virtus Banowetz.

Jerry had a deep faith and relationship with Jesus. Jerry attended Calvary Chapel in Greeley and enjoyed Men’s Bible studies on Tuesday night.

He is survived by his children Elise, Brent, and Christina. His 3 stepchildren Demitrius, Anthony, and Leticia. He also has 6 grandkids. He was a dad to many foster children and grandparent to their children as well. His parents are John and Rosina (Banowetz) Gerardy. His siblings include Brenda Walsh, Diana (Jack) Grabeel, Glen (Kim) Gerardy, Daryl (Melissa) Gerardy, Sherry (Erick) Jessen, Darrin (Amy) Gerardy, Sheila Gerardy, and Ryan (Amanda) Gerardy. He also had many loving nieces and nephews.

To order memorial trees or send flowers to the family in memory of Gerald "Jerry" Gerardy, please visit our flower store.