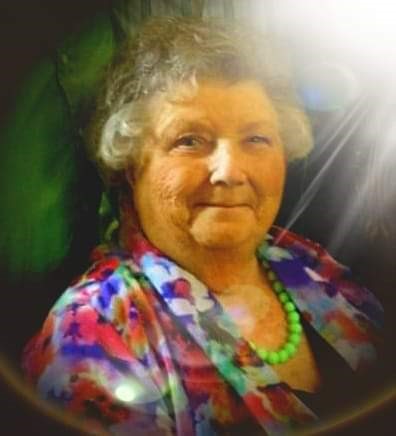 Funeral services to celebrate the life of Evelyn M. Goodknight, 88, of Davenport will be 11:00a.m., Monday April 26, 2021 at Halligan-McCabe-DeVries Funeral Home. Burial will be in National Cemetery, Rock Island Arsenal. Her family will greet friends prior to the service from 9:30a.m. until 11:00a.m. at the funeral home. Memorials can be made to University of Iowa Stead Family Children’s Hospital. Mrs. Goodknight died Wednesday April 21, 2021 at her home in Davenport.

Evelyn Mary (McBride) Goodknight was born in Philadelphia, PA on May 24,1932 to Evelyn and James McBride.  She met Walter Wayne Goodknight and married in 1951.  Together they had 4 children – Kathryn Anderson, Michael, Allan (Bev), and James.

Evelyn experienced culture shock when she moved from the “big” city to the “country”.  She was very naïve and believed Walt when he told her she planted seeds in the garden upside down.

Evelyn was very faithful and often prayed to St. Jude.  She and Walt were involved with Teens Encounter Christ (TEC) as adult advisors while living in Okinawa from 1971-1976.  She also enjoyed socializing with neighbors and helping friends.  Evelyn received her Cosmetology certification and worked in her mother’s salon in S. Philly.  She worked part time at West High School in the lunch program and at Good Samaritan Nursing Home in later years.

Evelyn is survived by her children, 11 grandchildren, 10 great grandchildren, her sister-in-law, Shirley Birkness and many nieces and nephews.  She was preceded in death by her husband, mother, father, brother James and sister Rosemary.  Special thanks for the care from Home Helpers and Genesis Hospice nurses.  She received daily special loving care from Megan Williams.

To order memorial trees or send flowers to the family in memory of Evelyn Goodknight, please visit our flower store.