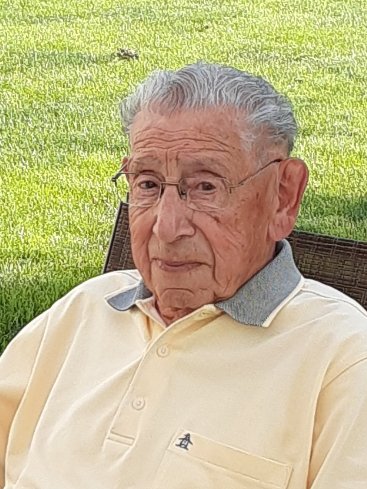 Funeral services will be 11AM Friday, November 5, 2021 at St. Matthews Lutheran Church with additional visitation being held from 10-11:00 AM prior to the service. Burial will be in Davenport Memorial Park.  Visitation will be held from 4-7:00PM, Thursday at Halligan-McCabe-DeVries Funeral Home.  If attending services, please wear a mask. Memorials may be made to St. Matthews.

Ed was born January 31, 1932, a son of Henry and Marcelina (Olivarez) Behr.  He served in the Army during the Korean War.  Ed was united in marriage to Marylyn Vogel in June 1957 until her passing on April 18, 1983.  He was later united in marriage to Barbara J. Drake on October 22, 1988 at Duck Creek Park. They have shared over 33 years of marriage and memories together.

He was a printer retiring from Wagner Printers in 1994.  Ed enjoyed golfing.  He also enjoyed bowling in the Northwest Turner League and was active withing the Turners where he excelled in gymnastics.  He maintained his abs of steel his entire life!  He was also a longtime member of St. Matthew’s Lutheran Church.

In addition to his wife, Marylyn, he was preceded in death by his parents; a sister, Diane Jimenez; two stepsisters Janis Thomas and Marilyn Eichner; and brother-in-law, Keith Drake.

To order memorial trees or send flowers to the family in memory of Edward Behr, please visit our flower store.