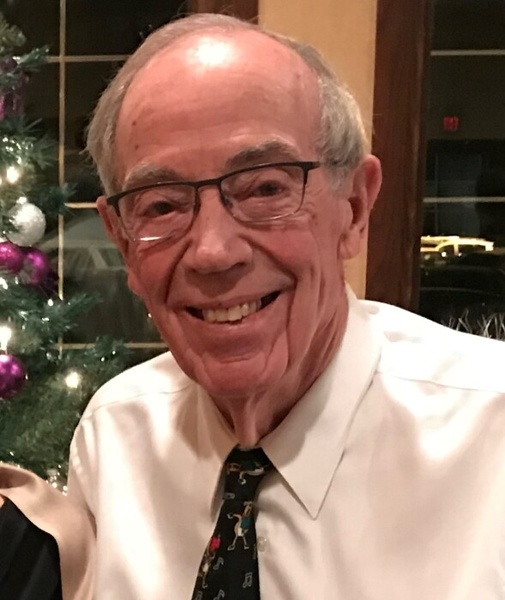 **Please Note:  This obituary was written by Don prior to his passing**

Funeral Services and a Mass of Christian Burial for Donald Hall, 83, a resident of Andalusia,

Burial will be in Aledo Cemetery, Aledo, Illinois. The family will greet friends from 4-6pm Thursday,

October 14, 2021, at Halligan-McCabe-DeVries Funeral Home, Davenport. There will be a rosary

at 3:30pm all are invited to attend. In lieu of flowers, memorials may be made to St. Patrick’s

2021, at Bickford of Moline, surrounded by his loving wife.

Don was born in Galesburg, Illinois February 1, 1938, the second son of Hays and Rosalie L.

(Biedermann) Hall. He was reared in Aledo and was the stepson of Bird (McCutchan) Hall. Don

graduated from Aledo High School in 1956 and received his B.S. degree from the University of Illinois in February 1961. Don served his country in the US Army and was honorably discharged that same year. Upon his discharge, he immediately entered store management training with the supermarket chain, The Kroger Company. He managed several stores in Illinois and Iowa, including the Davenport area. In 1969, Don joined National Tea Company, Davenport Division. He began in

store management and was promoted to Division Real Estate Manager. In 1977, When National

Tea Company was sold, Don entered the real estate sales profession. He has worked with Century 21 Marple Realty and Century 21 NorthPark Realty. After a merger, Don joined Mel Foster Company and retired in 2008, following 31 years of service. Don received numerous sales achievement awards and awards from the Greater Davenport Board of Realtors for his contributions to the community and his profession. Those awards included the Bert Frahm Award, Distinguished Service Award and Realtor of the Year Award. Don was very proud of all that he accomplished in his career and felt extremely privileged to have served as a Director of the Greater Davenport Board of Realtors. He also served as Director of the Board of Directors of the former Valley Shelter Homes for more than 17 years.

quickly that something terrifically huge had taken place in Don’s life. When the “cat was out of the

bag”, he could talk of little else. His entire family was stunned. After all, here was this supposed to

Alphonsus Catholic Church in Davenport. The private, family-only ceremony was followed by an

Davenport. Don and Kathy were overwhelmed. It was an historic, magnificently gorgeous Spring

Day. Don was so proud!

Don moved from Davenport to the lovely, new home in Andalusia that Kathy had built a short time

before she and Don met. It was right next door to her parent’s home. Living there, as Don

repeated many times, was a huge plus for him in many ways, but especially because the Smiths and

shared with him. These were particularly useful in projects involving carpentry and mechanics. He

was not just a smart man – he was also very wise.

welcomed by Don, and they didn’t last long! Don loved to eat!

He and Kathy and her parents frequently double-dated and generally attended Sunday Mass. They

even went on two vacation ship cruises together. Don used to frequently describe his time with

Kathy as “having given him a life”. Don loved the outdoors. For many years he regularly played

golf and enjoyed hunting, especially waterfowl and upland game birds such as pheasant and quail.

Don really enjoyed maintaining the large yard and landscaping, pruning, thinning out the

surrounding trees and providing maintenance needs around the home. He really got into wild bird

feeding and identification after he moved to the country and woods.

Kaitlyn (Crockett) Wessels, Noah, Scarlett, and Hugo, who always loved him as “Papa”

Don was preceded in death by his parents; step-mother, Bird (McCutchan) Hall, and siblings, Gary,

Online condolences may be expressed at www.hmdfuneralhome.com .

To order memorial trees or send flowers to the family in memory of Donald "Don" Hall, please visit our flower store.