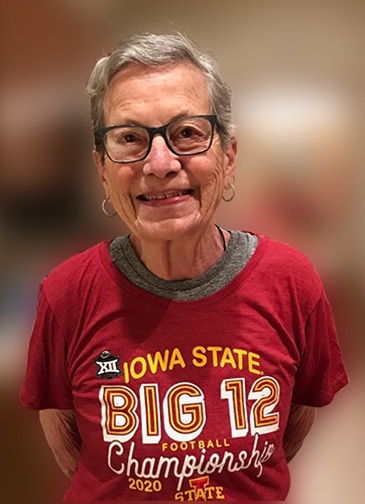 Skip was born on March 21, 1930 in Streator, Illinois and was the daughter of Louis Senz and Mary Ann Roach.  She was adopted by her Aunt Dolores (Dee) and Uncle Alan Freebury following the untimely death of her mother in 1932.  They quickly became her parents for life.  She gained her life-long nickname of Skip due to her happy-go-lucky lifestyle and perpetual smile on her face.

She grew up roaming the halls, ballrooms and boiler rooms of the Le Claire Hotel in Moline, where she lived throughout her childhood.  She attended St. Mary’s Academy in Moline and then Marycrest College in Davenport, where she earned her bachelor’s degree in education.

She was especially proud of her brothers and sister, who served in World War 2.  Her sister Betty served in the WASP (Women’s Airforce Service Pilots) program stateside; her brother Robert serving on a B-17 in the Pacific Theater, earning a Silver Star; and her brother Louis, who survived the Bataan Death March but died in the Japanese POW camp at Tuguegarao, Philippines, in July, 1942.

She married Matthew James Flynn of Davenport in 1953.  Matt served in the US Army during the Korean War stateside in Dearborn, Michigan.  Skip accompanied Matt to Dearborn and taught school there.

They returned to the Quad Cities in 1955.  Following a few years teaching in the Davenport Public Schools, she raised a family of six children:  Matt (Terri) Flynn of Davenport, Patty Schnackel of Riverdale; Dan (Angela) Flynn of Bettendorf; Joe (Paula) Flynn of Alleman, Iowa; Kitty (Steve) Fehr of Waukesha, Wisconsin; and Beth (Bill) Markovich of Bettendorf.  She was blessed with 14 grandchildren and two great-grandchildren.

Skip loved to swim, from her days as a lifeguard at Riverside Pool in Moline; to the Aqualetic Swim Club in Bettendorf; and, late in life, being a fixture at the Bettendorf Life Fitness Center and Middle Park pools.  She adored her rescued greyhounds, and could often be seen along the Duck Creek Bike Path walking her dogs (who were almost bigger than her).  She was a proud Iowa State Cyclone fan as evidenced by her vanity plate, Skip4Cy.

She and her husband Matt were devoted, active, long-time members of Our Lady of Lourdes Catholic Church in Bettendorf where she taught religious education, was an extraordinary minister and was a substitute teacher later in life at Lourdes Catholic School.

She has been preceded in death by her husband, parents and siblings.

Memorials may be made to the Scott County Greyhound Rescue, Maysville, Iowa, or Our Lady of Lourdes Catholic Church, Bettendorf.

Visitation will be 4:00-6:00 pm Friday, February 12, 2021 at Halligan McCabe DeVries Funeral Home, 614 Main Street, Davenport.  Funeral Mass will be held at Our Lady of Lourdes Catholic Church, 1414 Mississippi Boulevard, Bettendorf at 10:00 am Saturday, February 13, 2021.  There will be a brief visitation preceding Mass in the church gathering space at 9:30 am.  Private interment will be at the Rock Island Arsenal National Cemetery.

To order memorial trees or send flowers to the family in memory of Dolores "Skip" Flynn, please visit our flower store.