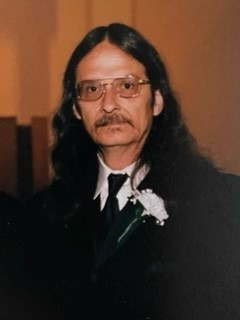 David C. Riberdy, 70, of Davenport, died January 19, 2022.  Private family services will be held with burial in the Rock Island National Cemetery, Arsenal Island.  Halligan-McCabe-DeVries Funeral Home is assisting the family with arrangements.  In lieu of flowers, memorials may be made to any local veterans organization.

David Charles Riberdy was born on March 5, 1951 in Illinois.  He was the son of Ervin and Sue (Hatchett) Riberdy.  Dave proudly served our country in the Army during the Vietnam War earning a Purple Heart.

Dave was united in marriage to Bess Fitzgerald from 1974 until 2012.

Dave worked for Lewis Machine and Tool as a machinist and computer programmer for over 20 years.

Although Dave didn’t speak a lot, he was a great storyteller.  He enjoyed riding motorcycles and watching stock car and NASCAR racing.  He had a passion for Rock ‘N Roll and could rock the air guitar with the best of them.  He also could do a mean robot.

Online condolences may be expressed by visiting www.hmdfuneralhome.com

To order memorial trees or send flowers to the family in memory of David Riberdy, please visit our flower store.