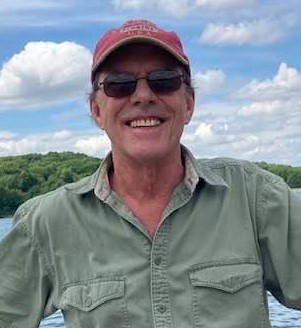 Visitation will be held from 4:00 p.m. – 6:00 p.m. with a time of sharing at 6:00 p.m. Thursday, April 28, 2022, at Halligan McCabe DeVries Funeral Home in Davenport. The time of sharing will be livestreamed and may be accessed on his obituary page at www.hmdfuneralhome.com. Memorials may be made to the family, as the family is still deciding how best to donate as reflection of his generous giving.

Dave was born April 25, 1956, in Muscatine, the son of Clarence (Jim) and Virginia (Sue) (Meyer) Ellis. He married Kathy Chapman. They later divorced but remained friends.

He was preceded in death by his parents; son, Matthew Ellis; brothers, Jim and Thomas Dean; and sister, Debbie.

Dave went to school at Marycrest and worked as a respected social worker for many years in a variety of positions. He also worked as a disc jockey, commercial writer and voiceover actor for area radio and television stations. In 1992, Dave opened KD Tees, an extremely successful screenprinting business that is still going strong today. He continued to fulfill orders until his final days.

Although Dave had successful careers, his true passion was his music. He played in several bands over the years, including Audrey and the Blue Cats and The TZZR Band. He and Dave Stanbro, his musical partner for many years, entertained crowds as the ever-popular duo, The Frydaddies. He also hosted open mic nights, performed solo and with friends, and invited friends and musicians from all around to perform at his infamous barn parties in Muscatine.

When he wasn’t working or performing, he enjoyed watching live music with friends and traveling. Some favorite spots were St. Pete Beach, Key Largo, and especially Key West, where he enjoyed listening to Mike McCloud at Schooner Wharf and participating in Parrot Head events.

Throughout the years, he donated many T-shirts and lots of entertainment to various charities and fundraisers. He was always there to lend a listening ear, to give a hug, or tell a bad joke. Dave was a beloved community member who made friends wherever life took him. He lived a full and happy life, bringing smiles and laughter to the lives of many. An altruistic man with a kind and tender heart, Dave served as a mentor and confidant to many. His absence is immeasurable and although words will never express the loss, the phrase “hooty hoo” does come to mind.

To order memorial trees or send flowers to the family in memory of David W. Ellis, please visit our flower store.