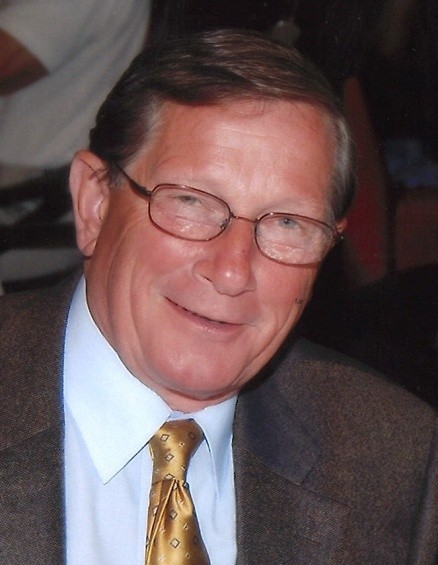 J. Craig Van Hook, 77, of Bettendorf, died Monday, June 7, 2021 at Trinity, Rock Island.  A memorial gathering will take place Saturday, June 12, 2021 from 2 until 4 p.m. at the Halligan-McCabe-DeVries Funeral Home, downtown Davenport.  There will be a memorial service following visitation. The service can be livestreamed by clicking on the link at the bottom of the page around 4 p.m. on Saturday. Keeping with his wishes, cremation rites have been accorded.  In lieu of flowers, memorials may be made to Figge Art Museum or Habitat for Humanity ReStore.

Joseph Craig Van Hook was born on December 22, 1943 in Piqua, Ohio, a son of Orville and Althene (Jones) Van Hook.  He graduated from Wilber Wright High School, Dayton, Ohio in 1962 and Ohio University with a BS in Accounting and Finance in 1966.  He served in the Ohio National Guard.  Craig met Nancy Maharg on July 3, 1967, was engaged to her in December of the same year and was united in marriage to Nancy on April 20, 1968.  She preceded him in death on September 12, 2020 after 52 years of marriage.

From 1966 to 1975, Craig worked at the NCR Corp, Dayton in various supervisory positions in International Accounting.  In 1975 he joined Deere and Company and served in various positions all over the world including Manager of Accounting (Wisconsin), Manager of Factory Auditing (Deere HQ), Manager of Accounting Tractor Facilities (Waterloo), Controller of General Co (Deere HQ), Manager of International Auditing, (Germany), Director of Finance of Deere Power Systems (Waterloo), and Finance Director of Power Systems (Mexico operations).  He retired in 2002 but still did contract work for Deere in Canada, Australia, and Spain.

Craig enjoyed volunteering as a docent at the Figge Art Museum, on the scholarship committee for the Davenport Community School District and was the 1st volunteer at the Habitat for Humanity ReStore. He also enjoyed playing golf, fishing, reading, and of course traveling and exploring the many cultures and places he and Nancy lived.

In addition to his wife, Craig was preceded in death by his parents and a sister-in-law, Bev Van Hook.

To order memorial trees or send flowers to the family in memory of Craig Van Hook, please visit our flower store.