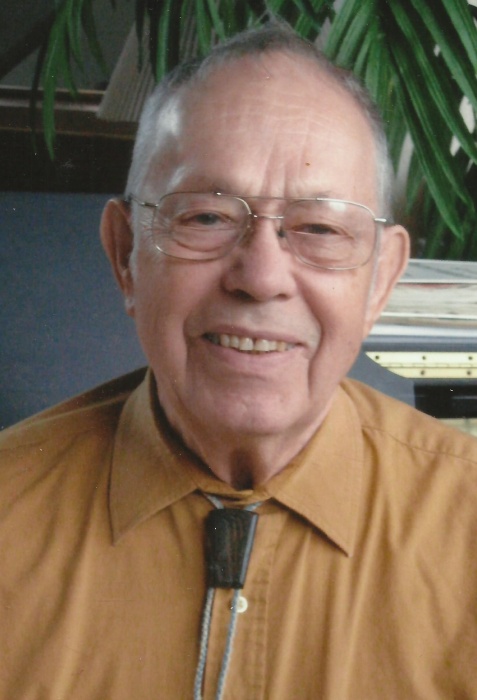 Keeping with his wishes, cremation rites have been accorded and services will take place in Fallon, Nevada, at a later date.  Halligan-McCabe-De Vries Funeral Home is assisting the family with arrangements.  Memorials may be made directly to Roselle United Methodist Church, 206 Rush Street, Roselle, IL 60172.

Carlas Lloyd Harold Schultz was born September 20, 1925 in Clayton County, Iowa, a son of Emil Sr. and Mabel Schultz.  He proudly served in the Navy as a radio operator primarily stationed in Nevada where he met Elma Faupel and they wed on July 7, 1946 in Fallon, Nevada.  She preceded him in death May 31, 1958.  He then met a young widow named Elsie (Subert) Johnston and was united in marriage with her on February 14, 1959.  They were married almost 60 years before her passing on December 13, 2018.

Carlas enjoyed a long career as a telephone engineer.  He worked for NE Iowa Phone, Nevada Bell, and Western Electric eventually retiring from AT&T in Rolling Meadows, Illinois, in 1990.

Faith and family were very important to Carlas.  He belonged to various church committees, taught Sunday school, and sang in the choir.  Carlas was supportive of all the kids’ activities like Scouts, sports, chorus, band, and other school functions.  He was focused on education and very proud that all children graduated from college.

Carlas loved to travel and the highlight of the year was packing everyone into the station wagon and seeing the country.  It wasn’t a proper summer vacation unless a thousand miles were put on the odometer.  All learned to keep a logbook in the glove compartment to record gallons of gas purchased, the date, price and mileage reading in order to calculate fuel efficiency later.  He and Elsie also took several trips abroad visiting family and friends in Germany and England along with a cruise through Russia.

Music was always a part of his life whether playing the euphonium with the Senior Band or listening to family members on the piano, organ, percussion, harp, ukulele or horn.  He loved to dance and never missed the opportunity to polka or waltz.

Carlas attended every reunion he could and was the family genealogist.  His research went back generations to roots in Europe.  He was a people person and loved talking to everyone – no one was a stranger for long and he could usually find someone they had in common.

Carlas had a tremendous sense of humor.  Each person in the family remembers their favorite Dad or Grandpa joke.  He was famous for giving raspberries on your neck and howling when saying goodbye.  Two of his daughters were privileged to give them to him in his final minutes.

While living in Medinah, Illinois, he got back to his farm roots by raising and showing rabbits.  He also had an extensive garden that contained about 15 varieties of gladiolas, black and red raspberries, asparagus, rhubarb, beans, snap peas, tomatoes and more.  Several generations have favorite memories of the tire swing!

In addition to his wives, he was preceded in death by his parents and siblings:  Emil Schultz, Jr., Wesley Schultz, Eldon Schultz, Willis Schultz, Floyd Schultz, and Eudora Moore.

To order memorial trees or send flowers to the family in memory of Carlas Schultz, please visit our flower store.