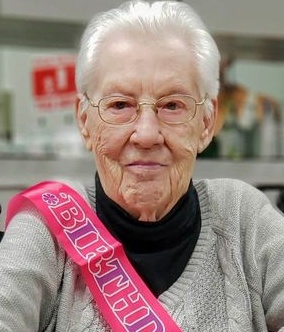 Bonnie Mae Hynes, 97, of Davenport, died peacefully Thursday, October 29, 2020 in her home surrounded by family. Private family services were held and she will be laid to rest in Chippiannock Cemetery, Rock Island.  Halligan-McCabe-DeVries Funeral Home is assisting with arrangements.

Bonnie worked in the payroll department at the Rock Island Arsenal during World War 2, in administration with multiple local doctors and later volunteered at Mercy Hospital.

Family was her greatest joy, and she cherished every opportunity to be with them. She was a die-hard Hawkeyes and Packers fan and enjoyed traveling, having visited South Korea, Hawaii, and many other states. Bonnie also had a green thumb and grew beautiful flowers.

In addition to her husband, she was preceded in death by her son, Douglas, a great-great granddaughter, Ella Rae; and siblings Georgetta “Sis” Laake and George “Bud” Naber.

To order memorial trees or send flowers to the family in memory of Bonnie Hynes, please visit our flower store.