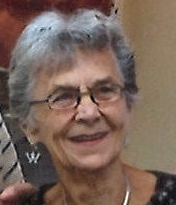 Funeral Services and a Memorial Mass of Christian Burial for Barbara J. Shaw, 90, of Davenport, will be 10:00a.m., Saturday, August 21, 2021 at St. Anthony’s Catholic Church, Davenport. Her family will greet friends at church prior to the mass from 9:00a.m. to 10:00a.m. Honoring her wishes the rite of cremation has been accorded and inurnment will be in Holy Family Cemetery, Davenport.  Halligan-McCabe-DeVries Funeral Home, Davenport assisted with arrangements. Memorials may be made to St. Anthony’s Catholic Church.

Barbara Jean Bedford was born April 8, 1931, in Davenport a daughter of Robert and Kathleen (O’Donnell) Bedford.  She was united in marriage to Charles Shaw on June 24, 1950, in Davenport.  He preceded her in death November 20, 2002.

Barb had worked many years in food service for the former Mercy Hospital and Genesis West before retiring. Barb was an active parishioner at St. Anthony’s Catholic Church for most of her life.

She enjoyed her family and friends and loved spending time with her grandchildren.

Her parents, husband, and an infant son, Mark, her Stepmother, Camilla Bedford, her siblings, Kathleen Bartnick, and an infant brother, David Bedford.

To order memorial trees or send flowers to the family in memory of Barbara Shaw, please visit our flower store.