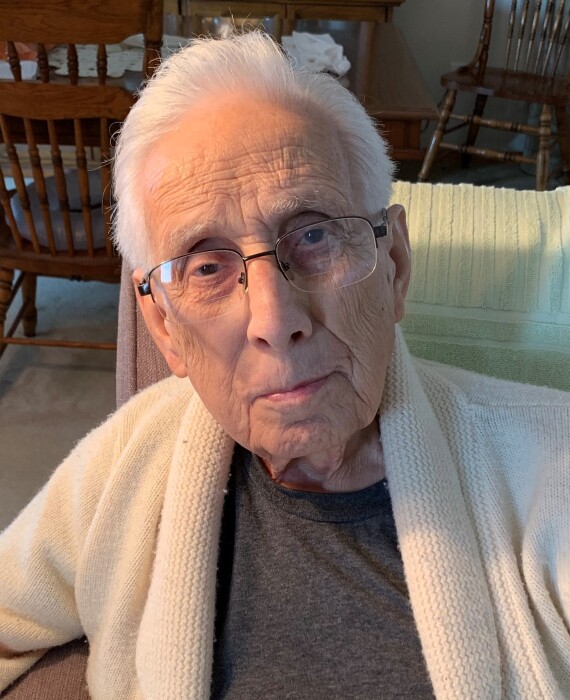 Private family services will be held at Halligan-McCabe-DeVries Funeral Home with burial at the Rock Island Arsenal.

Arnold was born October 25, 1928 in Omaha, Nebraska, the son of Joseph and Sarah (Arceri) Randone. Arnold served his country in the United States Navy from 1950 – 1954. He married Virginia Marks, January 20, 1951. They recently celebrated 70 years of marriage.

Arnold began working at Wagner’s Printers for the Wagner Family at the age of 13 as a messenger and continued until his retirement after 50 years, working his way to Vice President of Operations.

Anyone who knew Arnold, knew his wife and family were his greatest treasures. His Sunday morning breakfasts, the best bear hugs, and his overwhelming love and happiness in seeing his children and grandchildren succeed brought him the greatest joy. In his earlier years, he found peace in fishing, including many trips to “the pond” in Eldora; going out to his well-tended garden, that he meticulously mapped out and designed the previous winter, starting his plants from seed with hopes of providing the best outcome! He enjoyed the simple things in life, such as sitting outside and visiting with those who may stop by, the birds, and watching his beloved Chicago Cubs, Bears and Iowa Hawkeyes. His canine best friend, Baxter, will be anxiously waiting for his master to return to him.

Those left to honor his memory include his wife, Virginia; children, Susan Stahr of Denver, Colorado, Becky (Philippe) Henley of Eldridge, Michael (Terrie) Randone, Lisa (Eric) Baldwin, and Karen (Joel) Slaby, all of Davenport; sixteen grandchildren and seven great-grandchildren, with two on the way.

He was preceded in death by his parents, and brother, Anthony Randone.

To order memorial trees or send flowers to the family in memory of Arnold Randone, please visit our flower store.