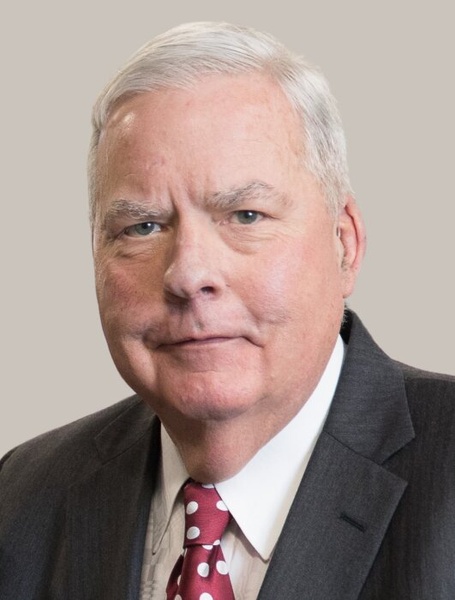 Michael “Mike” Duffy, 71, of Davenport, died peacefully and surrounded by family on January 21, 2022.  Despite being fully vaccinated and boosted, he died of pneumonia following COVID.

Funeral services and Mass of Christian Burial will be at 10:30 a.m., Wednesday, January 26, 2022 at St. Paul the Apostle Catholic Church, 916 E. Rusholme Street, Davenport.  The Mass will be livestreamed by clicking https://www.facebook.com/stpauldisciples A visitation will be held from 4 until 7:00 p.m., Tuesday, January 25th at the Halligan-McCabe-DeVries Funeral Home, 614 N. Main Street, Davenport.  The family will pray the Rosary at the conclusion of the visitation that all are welcome to join.  Additional visitation will be held Wednesday prior to Mass at church beginning at 9:30 a.m.  Burial will be in Mt. Calvary Cemetery, Davenport

Michael Leo Duffy was born in Minneapolis, Minnesota on March 17, 1950.  Shortly thereafter, his family moved to Davenport where Mike began his work life by crossing the street from his house to serve 6:30 AM Mass at Sacred Heart Cathedral.  Mike went on to graduate from Sacred Heart Grade School, Assumption High School, and St. Ambrose University.

Though as an adult Mike distinguished himself by his professional integrity, when he was 11, Mike lied about his age to secure a job as a paperboy for the Quad-City Times.  A few short years later, he joined Per Mar Security and Research Corp, the company founded by his parents, John and Eleanor (Duax) Duffy.  After success at an entry level job (cleaning dog kennels), Mike was promoted during high school and college to work as both a dispatcher and a scheduler.  These early work experiences influenced one of Mike’s core values: Treat people from all walks of life with equal respect.  Mike was an avid couponer and yet a generous tipper.

Mike married Linda Brus on July 28, 1973, at St. Anthony’s Catholic Church in Davenport.  This union cemented a tremendous partnership that encompassed both family and business.  Mike put family first, scheduling his business commitments around his family life.  The demands of his business career required some travel, but he invariably wanted to come home a day early to be with Linda and the kids. He would go out of his way to organize family gatherings – serving as chef, activities director, and Life of the Party. Mike had a quick wit and an incredible (Irish) sense of humor that was known to many but most loved by his family.

In the early years, Mike held various positions at Per Mar including Dispatch Supervisor, Alarm Manager, Vice President of Operations, Executive Vice President, Chief Operating Officer, President and CEO. During his term of leadership, the company completed more than 80 acquisitions of life safety companies, eventually becoming the largest family-owned full-service security provider in the Midwest while also operating one of the largest fire alarm sales and service companies in the country, Midwest Alarm Services.  Mike was a licensed Private Detective in seven states and held the level of U.S. Government Secret Clearance, in addition to being involved in many boards and committees within the industry.  Mike also was a member of the Young Presidents’ Organization, and the Top Gun Forum.

In the community, he served St. Ambrose University, including as Alumni President, the Handicapped Development Center including as Chairman of the Board, the Scott County YMCA, the Davenport Chamber of Commerce, the Downtown Davenport Development Corporation and many more boards and committees.  He was also a cofounder of Rejuvenate Davenport.  Mike was recognized with numerous awards, including the Iowa Business Hall of Fame, the Quad Cities Area Junior Achievement Hall of Fame, and the Security Industry Hall of Fame.

Mike was a lifelong learner; a voracious reader who consumed four newspapers a day and always had a book at hand.  He was well known for thoughtfully sending many articles to his loved ones, business associates, and friends.  Mike dabbled in real estate, which led to his involvement in dozens of partnerships over the years.  Throughout his life Mike supported conservative politics, pro-life causes, and Catholic education.  He was well-grounded in his Catholic faith and frequently engaged in Corporal Works of Mercy, including his attendance at many funeral visitations and the practice of sending cards and memorials.

In addition to his wife Linda, Mike is survived by children: Brendon (Megan) of Cold Spring, Minnesota, Bridget Murphy (Kevin) of Davenport, Brianna Lane (Mark) of Preston, Iowa, Bradley (Alison) of West Des Moines, Brian (Alexandra) Duffy of Davenport, Bethany Ketz (Jon) of Lenexa, Kansas; 31 grandchildren; his siblings, Dennis (Ann), and Patricia, both of Bettendorf.  He was preceded in death by his parents, his son, Ben, and his grandson, Louie.  Mike shared a special relationship with Ben, which was made more beautiful by his passing a year to the day after Ben’s death.

In lieu of flowers, memorials to honor Mike may be directed to the Scott County Catholic Schools Foundation https://forms.diamondmindinc.com/assumptionhigh/sccs?token=882611825 or the Women’s Choice Center https://womenschoicecenter.com/donate .

To view the history of Per Mar click https://www.permarsecurity.com/our-company/our-history

To order memorial trees or send flowers to the family in memory of Michael Duffy, please visit our flower store.